There is still a long way to go for truly universal access.

Personal mobility devices have been used for centuries by people with reduced mobility. Their benefit to society is invaluable and of utmost importance!

However, the path towards the development of personal mobility devices has not been an easy one and there’s still a long way to go for truly universal access.

It is always worth raising awareness of the importance of living in a more inclusive society, where free access to all buildings would be more than an idealistic vision, it would become a requirement that would actually be put into practice and become a universal right.

History tells us that this evolution towards universal access has seen its ups and downs, but despite all the changes and all the awareness, it remains slow.

What is a personal mobility device?

The most common personal mobility devices are the typical walkers and walking sticks, used since time immemorial, and wheelchairs, which have seen the biggest evolution in the last few decades. But there are many more mobility devices, some of which have even been used for centuries.

It was only in the second half of the 20th century that true awareness regarding the need to adapt physical environments to people appeared. That is how, little by little, the concept of the elimination or removal of barriers came about, through the construction of ramps and lifts for easy access to buildings and upper floors. The walking stick has been used by elders since time immemorial

But the great turning point in the history of reduced mobility was in the year 1974, at the “United Nations Expert Group Meeting on Barrier Free Design”, held in New York. It was the official acknowledgement that the removal of physical barriers had to happen so that people with reduced mobility could fully participate in all aspects of social life, on equal terms. It also stated the need for educating architects, engineers, urban planners and landscape artists on universal access.

The evolution of an awareness of people with reduced mobility

If we take a look back to the Middle Ages, society did not feel any responsibility for people with reduced mobility or disabilities. For that reason, we cannot tell of any progress at that time. In addition, many of these people lived as outcasts in a society full of superstitions.

In the 15th century, Queen Elizabeth of Spain set up the first hospital where soldiers were provided with prosthetic and therapeutic devices, and they would receive a pension. During her reign, institutions for children and blind, deaf and disabled people were also created.

In the 18th century – under the influence of Voltaire and Rousseau – there was a change in attitude towards people with disabilities based on a shift in mindset: gradually, society started to look at life and the world as the basis of human experience.

Simultaneously, with the arrival of the Industrial Revolution, people with disabilities or reduced mobility began to become public responsibility.

Later, in the 19th century, with the development of medicine, scientists began to study the possible causes of disabilities.

Finally, in the 20th century, this change of attitude towards reduced mobility and disability changed more dramatically, due to the following factors:

Now join us on this journey through the history of personal mobility devices. We have much more to tell you!

The Evolution of the wheelchair This is a drawing by an unknown Chinese artist. It features in the first page of the “Xiao er lun”, where Confucius (551? B.C – 478? B.C) talks to a child while sitting in a wheelchair. (Source: https://commons.wikimedia.org/w/index.php?curid=9529940)

One of the first wheelchairs we know of is from the time of Confucius, the 5th century B.C. It was a very rudimentary version of a wheelchair, but was used with the purpose of helping people with any type of reduced mobility.

In 1595, King Felipe II of Spain used a fairly elaborate wheelchair for the time, with arm and foot rests. King Felipe II in his advanced wheelchair, ahead of its time.

But it was only in the 18th century that the first wheelchair appeared that resembles the ones we have today. It had two large front wheels and a small rear wheel on each side. 19th-century wheelchair, made of wood and wicker.

The first patent on a wheelchair is from 1869. It was a bimanual model driven by rear wheels. Soon new models would emerge.

The first folding wheelchair was designed by two engineers in 1932. One of them had had an accident with a land mine during the First World War. Although the first electrically driven wheelchair dates back to 1924, the first wheelchair propulsion was designed in 1950 by George Klein. The purpose of this electric wheelchair was to help veterans of the Second World War. Contrary to what happened in the First World War, many of the soldiers who suffered spinal cord damage managed to survive, which meant a greater need for wheelchairs for veterans with physical disabilities.  At that time, there were many advances in manual wheelchairs, however, it was not a solution for quadriplegic individuals, who were unable to use a wheelchair without the assistance of another person.

Thanks to the support of the Canadian Government and other scientists, George Klein managed to invent the electric wheelchair. There’s no doubt that the existence of many soldiers and disabled war veterans was key to developing rehabilitation engineering.

In addition to the invention of the electric wheelchair, other developments have been made in personal mobility devices over the last century.

Mobility scooters came about for the first time in the late 60s, early 70s. They were quite successful and seen as alternatives to the electric wheelchair. Nevertheless, they were designed for people who can walk, but who cannot travel long distances on foot because of problems in their knees or arthritis. Most of the mobility scooters today are more advanced. They’re electric and have rechargeable batteries. The distance they can travel is variable, but some of them go for up to 60 km on one charge. The variety of mobility devices is immense, since there has been a growing concern for our wellbeing and that of our loved ones with reduced mobility. We all want to enjoy life with the same freedom and equal opportunities.

Some of the first commercially produced stairlifts were advertised and sold in the United States in the 1920s by Inclinator Company of America. Many of the users at that time were victims of polio.

However, historians found that there is a reference to a chair lift used by King Henry VIII (16th century). The King, who had fallen off a horse, used a giant chair that carried him down the stairs of his London residence, through a system of ropes.

These chair lifts have revolutionised the way people with reduced mobility navigate their houses, as stairs have ceased to be an obstacle for them. Stairlift featured in “Witness for the Prosecution”, directed by Billy Wilder, 1957, based on the novel by Agatha Christie.

In the 1970s, stairlifts started being used by people with restricted mobility, lack of balance or knee pain. They made all the difference in preventing falls and therefore serious injuries which could be very difficult to recover from, especially if the person was older. One of the first Stannah stairlift models in the 1970s.

Modern stairlifts, like  Stannah stairlifts, fold down so that they do not obstruct the stairs, meaning that other people who also want to use the stairs can do so easily. Stannah, at the forefront of stairlifts with over 40 years of experience.

There’s another mobility device we tend to forget, despite its importance in our daily lives: the elevator!

The evolution of the elevator 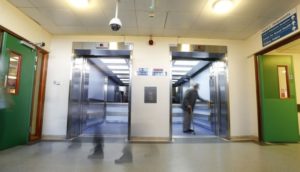 Elevator with automatic doors, in a hospital

We use lifts (or elevators) all the time, regardless of whether we have any mobility issues. It just makes life easier for everyone and they have been around for a long time!

The first time an elevator was mentioned was in the works of the Roman architect Vitruvius, who mentioned that Archimedes had built the first elevator around the year 236 B.C.E. This elevator was made up of a booth supported by ropes, which were operated by people or animals.

However, it wasn’t until the year 1000 C.E., as recorded in the book of the secrets of Ibn Khalaf al – Muradi (from Islamic Spain), that we see a description of the use of an elevator as a lifting device, aiming to use it to hit or destroy a fortress. Prototype of an elevator in the 15th century

Around the 17th century, there were already prototypes of elevators in some English and French buildings.

In 1823, two British Architects – Burton and Hormer – built the first cabin lift, used to transport tourists to a platform where they would have a view over the city of London. First cabin lift in 1823 built by Burton and Hormer.

Other lifts have emerged over the years, but they could still not be considered completely safe. If one of the ropes broke, there wasn’t a security system that would stop the elevator from falling.

In 1851, Waterman created the first prototype of a goods lift. It was a platform attached to a cable, to raise and lower goods and people. As taller buildings were being built, people got used to the idea of not having to climb stairs and, therefore, lifts were becoming more popular. 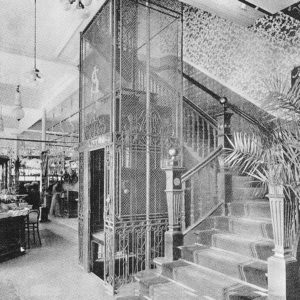 One of the oldest Stannah lifts (picture from 1925).

In 1957, the first automatic door system was created for passenger elevators, which made them a very practical mobility device, as they removed the need for manually operated doors.

There is no doubt that after the industrial revolution and through the increased construction of tall buildings and skyscrapers, the elevator became a mobility device for all. Even so, the existence of an elevator in a building does not mean that universal access is guaranteed.

Throughout the 20th century there were other inventions like stairlifts and platform lifts, that have revolutionised universal and independent access for many citizens and have contributed to the elimination of barriers for people with disabilities or reduced mobility.

However, there is still a long way to go for a totally inclusive society, where access would be truly universal.